When I last wrote about MkDocs, the most recent version was 0.12, but 0.13 was just around the corner. We are now hard at work on 0.15! So it is about time to do a quick update.

With over 300 commits which include a ton of bug fixes and new features since 0.12, I wont bore you with the full list. That is what the release notes are for. Instead I'll highlight a couple of my favourite additions that are released or will be coming in 0.15.

Reload the development server with WebSockets

This is actually a feature that landed in MkDocs a while ago, it just hasn't been mentioned much as it was an improvement to a feature that already existed; the development server. It also happens to be one of my favourite features as a user.

Whenever you edit a file and save changes in your editor, if mkdocs serve is running, the filesystem event will be captured, the documentation rebuilt and the page will be automatically reloaded. This brings near live feedback to editing if you have your editor and browser sitting side by side.

We owe this functionality to the fantastic python-livereload library which makes this very easy to do.

The biggest addition in 0.13 was the much anticipated client side search. Below you can see a screenshot of it on use in the MkDocs documentation. The search results update almost instantly as you type, creating a really responsive search experience. 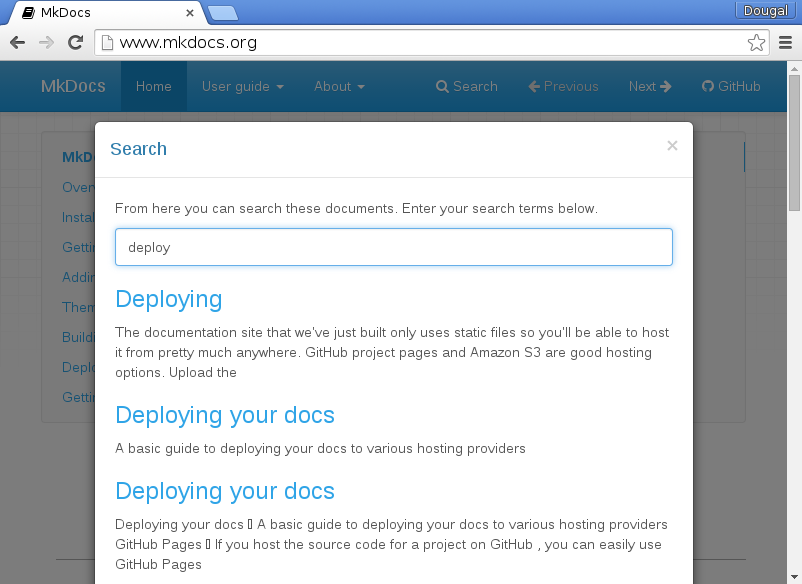 Search works in MkDocs by generating a JSON file with the full content of the documentation during the build. This is then used with lunr.js to create and search an index.

MkDocs also received a new CLI thanks to the excellent Click library. On the surface this doesn't seem like a huge feature, but it is now far easier to discover usage from the command line with mkdocs --help.

Click is fantastic to work with and it made writing the CLI easy and very elegant compared with some of the more traditional Python libraries.

This feature is coming with MkDocs 0.15 and was just merged into the master branch today. Users will soon be able to create custom themes and distribute them as Python Packages on PyPI. This change also sees 13 of the 15 MkDocs themes be moved into their own repos and packages. Doing so will allow for faster and more flexible development outside of the code repository.

I am really excited to see what themes users come up with!

Now, back to work on MkDocs! I'll do some updates again soon about the next features that I am working on.

Do you have any feedback or comments? The best place for discussion is on Reddit or Hacker News. Otherwise, email me.